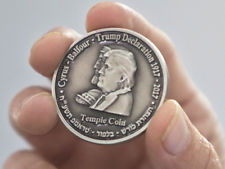 Is there a prophetic tie between Trump and Cyrus?

In considering whether President Trump is fulfilling prophecy, one must first understand that many Bible prophecies have multiple meanings and fulfillment. For example, the Isaiah 14 prophecy regarding the fall of a prideful ruler refers to both Antichrist of the last days. The idea that prophecies can have parallel or multiple fulfillments may not be widely taught in churches today, but the teaching is rarely disputed.

Following this thought, some have noted parallels between King Cyrus, leader of the Persian Empire in the sixth century BC, and President Trump. Prophecies concerning Cyrus are found in Isaiah 44-45, and in the writings of Jeremiah, Ezra, and Daniel.

Isaiah’s prophecies regarding Cyrus are notable because they are specific. They precede his birth by decades, yet they mention Cyrus by name. They also note how God would use this king to accomplish His purpose, even though Cyrus would not be a Hebrew or strong believer.

What does the Bible say

Of Cyrus it was prophesied:

What do historians say?

Historians note that secular and biblical sources show that King Cyrus fulfilled all of the prophecies noted above. Prominent passages in Daniel, Ezra, and the book of Nehemiah note how the prophecies were fulfilled.

What is the connection to President Trump?

At the time of this writing, almost 2500 years after the death of Cyrus, a growing number are suggesting that President Trump may be on a parallel track to fulfilling prophesies like King Cyrus. The similarities are striking:

What does Israel think about President Trump and Cyrus?

On March 6, 2018, Israel’s Prime Minister, Benjamin Netanyahu publicly acknowledged the striking similarities between President Trump and King Cyrus. Further, Israel has minted a commemorative Half Shekel, with the images of King Cyrus and President Trump on one side, and the Temple on the other. Israel has high regard for what Cyrus did, and what President Trump is doing.

If President Trump is indeed destined to fulfill prophecies previously assigned to King Cyrus, then there are two notable prophecies we should look to be fulfilled in the near future. The first is the building of the wall in troublesome times and the second is Trump’s facilitating the building of a new Temple (which implies total Hebrew control of the city of Jerusalem and the Temple Mount area).

Daniel 9:25 details the building of the wall. The word wall is translated moat in some translations, and both translations are acceptable. However, the primary connotation of the word wall is symbolic (i.e., complete protection). And as Jerusalem was never completely encompassed by a moat, the Daniel 9 prophecy very likely references the wall profiled in the book of Nehemiah. Thus, a physical wall is the better interpretation if a parallel prophecy is to be fulfilled by President Trump in the future.

The building of a wall along the southern border of the United States (for the protection of American citizens and interests), was a principle campaign promise and is currently a hotly debated issue in Congress. President Trump seems to be expending much political capital on the southern border wall project. Many suggest his efforts are not wise or politically correct. However, if President Trump is to fulfill the prophecies associated with Cyrus then the US wall initiative will be completed.

Eschatological ramifications of prophecies about Jerusalem and the Jewish Temple

Prophecies regarding the complete restoration of Jerusalem, including the building of a Third Temple and resumption of daily sacrifices, are key to any discussion on the events of the last days. Dozens of Old and New Testament prophesies note that before the 7-year Tribulation period begins, Israel will be re-established as a nation and Jerusalem will be its recognized capital. Prophecy also notes that before the mid-point of the Tribulation, a new Temple will be built and the practice of making daily sacrifices in the Temple will be in place. The fulfillment of prophecies regarding the Temple and restoration of Jerusalem set the stage for the fulfillment of “Great Tribulation” period events.

President Trump’s order to move America’s Embassy to Jerusalem makes clear his desire to see Jerusalem become the globally recognized capital city of Israel. To my knowledge, the Trump Administration has made no public statements about rebuilding the Temple, but details of a new ‘peace plan’ are set to be revealed before June 2019 (and may address the Temple issue). In Israel, President Trump’s association to the Temple is more public. For example, on March 29, 2018, the Israel News publication wrote:

“A prominent Israeli rabbi believes…that Trump has a big role to play in the building of the Third Temple and the coming of Messiah. Rabbi Yosef Berger is the rabbi in charge of King David’s Tomb on Mount Zion, and the son of a widely revered Hasidic leader. In remarks to Breaking Israel News, Rabbi Berger cited a medieval rabbinical source that predicted that while the first two temples were built by Israel, the third would be built by the "descendants of Edom," a phrase that in some later rabbinical literature is a euphemism for the Christian world.”

Regardless of what role President Trump plays in the fulfillment of prophecy, the calling of every believer is clear. 1 Timothy 2:1-4 directs believers to pray for those “in authority.” I encourage all to pray for those who lead—that they would be kept safe, know and be open to the Lord’s leading, and accomplish God’s purpose.